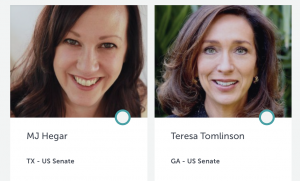 The 2020 Senate landscape got a little clearer last week.

Her potential entrance into the 2020 field had energized Democrats who believed she would have the best shot at flipping the seat. And Rep. Cindy Axne, who flipped her House seat just last year, has also said she won’t challenge Iowa Sen. Joni Ernst.

Georgia and Iowa will both be tough to flip but the chances are significantly better in a presidential year. A top-tier candidate makes the difference between winning and losing.

The good news is, this early in the race there’s still enough time for great candidates to emerge—and last week, one did: Teresa Tomlinson, the former mayor of Columbus, Ga.

She’s now the second candidate on our 2020 Senate Red to Blue slate. Give her and MJ Hegar an early leg up: Donate $10 to help launch their campaigns.

Tomlinson may not have the national name recognition of Stacey Abrams, but in Georgia she’s a formidable presence and well equipped to take on a seasoned incumbent and statewide name like Sen. Perdue.

In 2011 she became the mayor of Columbus—the third-largest city in the state—ultimately serving two terms through the beginning of this year. She has the distinction of being the first woman elected to that office, and the first mayor since the city’s consolidation in 1971 to be re-elected.

For years, her name has been floated in Georgia as a potential candidate for statewide office. Now, she’s finally taken the plunge.

Welcome her to the race by chipping in $10 now to our 2020 Senate Red to Blue slate.

And even more good news: Rep. Joaquin Castro announced last week he won’t run for Texas Senate, so MJ Hegar should have a clear path to the nomination. Big early fundraising numbers make it even less likely she’ll get a challenger. Chip in to her campaign too.