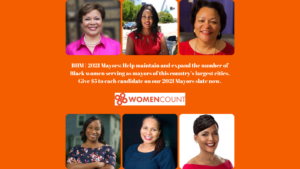 Mayors have a critical role in public policy, as elected officials standing on the front lines of crises—mitigating climate change, furthering racial justice, and of course, managing the coronavirus pandemic. They’re also an important part of the political pipeline: Mayors often go on to serve in Congress, or as governors.

Last year we asked you to help us build the pipeline of Black women who have the financial support they need to run for higher office, and you responded by giving more than $100,000 to Shirley’s List, a slate of women running for local office in California.

Shirley’s List was such a success that we promised you we’d be back with more local candidates in 2021. Now, here they are:

For Black History Month we’re debuting our first local candidate slate of the cycle: Six Black women, both incumbents and challengers, who are running for mayor in some of the country’s largest cities this year. Chip in $5 to each of them.

Chip in $5 now to each of these women now and help maintain and grow Black representation at city hall.