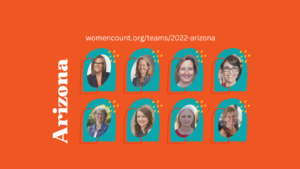 To mark the occasion, we’re bringing you the second slate in our series of Super States—Arizona.

Arizona is number two on our list because it’s another state where abortion rights are under attack: A judge just allowed the state’s 19th century ban to go into effect.

The slate is eight candidates: Two statewide offices, one Congressional seat, and five state legislative seats. Chip in $5 or more to each of them now.

This year in Arizona, voters need to:

What happens in Arizona this year could solidify its status as a swing state, help protect its electoral votes in 2024, and put the state on a path to restore abortion rights.