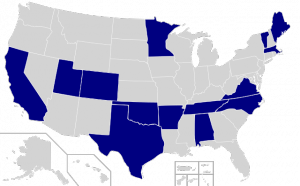 If you watched this week’s debate, you would think the only critical upcoming date on the primary calendar is Feb. 3—the Iowa caucuses. But the biggest voting day of the year (outside of theElection Day) will be Super Tuesday, and we’re less than 50 days away.

On March 3, 14 states will hold presidential primaries, and more than a third of the US population will cast a vote. While that’s not the largest Super Tuesday in history (that happened on Feb. 5, 2008, when 24 states with more than half of national convention delegates held primaries) it will be the most consequential day in the 2020 primary calendar.

That’s because Super Tuesday isn’t just about the presidential race. Five states will hold Congressional primaries as well, including California and Texas, and 8 women in key races need our help to triumph over male challengers.

Get to know them and give $5 or more to each woman on our Super Tuesday slate!

The candidates who need your help the most are:

Deborah Ross (NC-2), a former US Senate candidate and state representative who *will* flip this open, Republican-held seat if she wins the nomination, since NC-2 was recently redrawn to be a safe Democratic district.

Amanda Edwards, MJ Hegar and Cristina Tzintzún Ramirez (TX-Sen). Often we stay out of the primary when multiple women face off. But this race is so important we couldn’t. Give to all of them so one can win against the men—because until women are 50 percent of Congress, they all need our help!

Shannon Hutcheson (TX-10). She’s the only woman running against two men, including the 2018 Democratic nominee. The winner will go up against Republican Michael McCaul—who came within 4 points of losing his last election.

Gina Ortiz Jones (TX-23), who came within less than a point of defeating now-retiring Republican Will Hurd. The odds are far greater that Democrats can pick up this seat now that it’s vacant—and we want that Democrat to be a woman.

Help these women do just that—chip in $5 or more to our Super Tuesday slate!