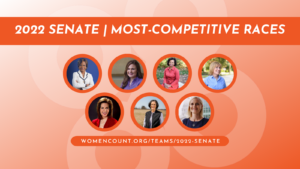 In an exciting development, it appears that former Rep. Abby Finkenaur is days away from announcing a bid to challenge Iowa Sen. Chuck Grassley. And when she does announce, we want some of the first contributions coming into her account to be from WomenCount donors.

A former member of the Iowa state House, Finkenaur, at 25, became the second-youngest woman ever elected to the US House when she unseated a freshman incumbent in 2018. When she won that race, she also became—along with current Rep. Cindy Axne—one of the first women elected to the House from Iowa.

That year’s blue wave, funded by women donors, propelled Abby and so many other history-making women into office. It showed exactly why WomenCount exists and what women can do when we pool our collective political power. We need to work as hard this cycle as we did then—because the stakes for our country, and women, are no less high.

We were devastated when Abby lost last year, but now we have our chance to put her back in Congress. Her bid makes the Iowa Senate race very competitive. Chip in $5 or more to Abby now.