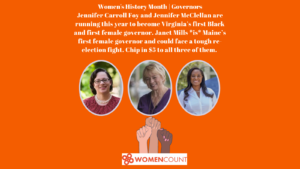 This week’s new slate is all about governors, because 50 percent of you chose governors as one of the race types you would most like to prioritize this cycle.

On our WHM Governors slate are three women who are or could be ‘first’ governors: Jennifer Carroll Foy and Jennifer McClellan, either of whom could become Virginia’s first Black and first female governor this year, and Janet Mills, who is Maine’s first female governor and will be up for reelection next year.

Check out the slate and chip in $5 to each candidate.

Women currently make up only 16 percent of all governorships—only 8 women governors in the country!—and there has never been a Black woman governor in the US.

Both Jennifers are already in a tough primary against former Virginia Gov. Terry McAuliffe. And former Maine Gov. Paul LePage—a bombastic Republican with a Trump-like personality—has already announced his candidacy against Janet.

Make sure these women have the early cash needed to compete: Chip in $5 or more to our WHM Governors slate.

PS: Next week we’ll have a new WHM slate and an important update on an upcoming race—so keep a close eye on your inbox.