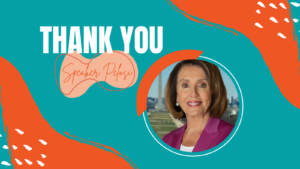 Today, California Rep. Nancy Pelosi confirmed she will not run for another term in House leadership, though, thankfully, she plans to stay in Congress.

Her retirement marks the end of one of the most consequential speakerships in United States history.

Rep. Pelosi gave a nod to her legislative accomplishments during her retirement speech, referencing the work she did under three presidents to stabilize the economy, expand health care, and tackle climate change.

She has embodied the workaday dedication to bettering our country and the lives of her constituents that every legislator should aspire to, even as she stood out as a once-in-a-generation political talent and changemaker.

When she was elected House Minority Leader in 2003, it was seen as a coup for the left wing of the Democratic Party. She was the first woman of either party to hold the position, and her long-time support for same-sex marriage and other LGBTQ rights placed her outside the political mainstream of the mid-90s to early-00s.

In 2006 she cemented her place in history when she was elected to the speakership, becoming the first woman ever to hold that position. She has been the highest-ranking woman in our government until Sen. Kamala Harris was sworn in as Vice President last year.

During her retirement speech she referenced how far women had come during her tenure, noting that when she first entered Congress in 1987, there were 12 women in the House Democratic Caucus. According to the Center for American Women in Politics, there were only 23 women total in the House, and only two in the Senate.

Now, there are 90 Democratic women and 148 women of both parties in the House and Senate. Seventy-five percent of the Democratic caucus is made up of women, people of color and LGBTQ people. While we have a long way to go, we also acknowledge progress.

“I never dreamed I would go from homemaker to House Speaker,” she said as she signed off on 20 years of leadership. Now, because of her, girls and women can dream of a career in politics and leadership—and they are in record numbers.

There are 10 freshman Democratic women entering the House next year. Consider giving $5 or more to each of them to show your support for the next generation of Democratic female leadership.

Thank you Speaker Pelosi, for all you have done for the last 20 years, and all that you will do during the 118th Congress.