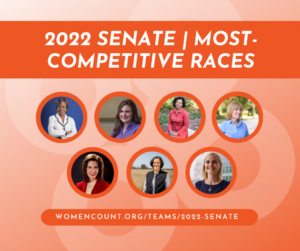 Things are coming to a head in Washington—and the US Senate is *again* the biggest hurdle.

To recap, Republicans (and some “centrist” Democrats) are:

Weeks like this one always remind us how different these legislative negotiations would be if we had won a few more Senate seats, and repealed the filibuster.

Good thing is, we can still do that in 2022. The Senate map looks pretty good for Democrats, and the women on our 2022 slate can carry us to victory.

This week isn’t only important in Washington—it’s important to our candidates, because September 30is the last quarterly fundraising deadline before campaigns will kick into high gear.

The numbers our women post after the end of this week could make or break their ability to stick out a tough primary next year—and some of them *will* have tough primaries. Strong numbers also establish credibility and often impact continuing fundraising success. Indeed, research shows that early money is particularly important for women candidates.

Help them post big numbers; Give $5 or more to each woman on our 2022 Senate slate.