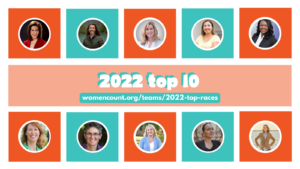 Buckle in – this post is going to get wonky.

If you want to skip straight to our new slate, see it here.

Democrats broadly are catching unexpected momentum right now, driven by the fall of Roe and resulting in a surge of special election wins, increases in women’s voter registration, and drives to put abortion rights on the ballot.

All of this abortion-driven enthusiasm should be great news for Democratic women. But actually, 2022 is on track to be a year our representation in Congress shrinks.

So what’s going on? A lack of party support in recruitment and primaries.

According to the Center for American Women and Politics at Rutgers University, the number of women Democrats have recruited to run for House seats has dropped since 2018 (356 → 321), while Republicans have more than doubled theirs (120 → 260).

That’s led to a drop in women primary nominees on the Democratic side: 183 in 2018, 204 in 2020, and only 177 this year. Another issue: Of the 31 Democrats leaving the House this year, 10 are women, and many of their seats are not being contested with women nominees.

This pipeline problem leads to predictable primary results: Only 41 percent of Democratic House nominees are women this year, compared to 47 percent in 2020.

Looks like the party waging war on women learned a lesson from 2018 that the party actually supporting our rights did not.

Women can win, if the early support is there. We see this, again, in House primaries, where women win primaries at the same rate they file to run (24 to 26 percent in 2018, 32 to 33 percent in 2020, and 29 percent for both this cycle. We see it in the general election too: In the 2018 Year of the Woman, 60 percent of House seats that changed hands were flipped by women.

But winning equally can’t close the gap if we’re not equally recruited or running in the first place.

The Dobbs decision has clearly galvanized Democrats, especially women. But that wake-up call came too late. By June 24, recruitment was over, and so were some of the most hotly contested Congressional primaries. (New York is a big exception. Key endorsements could have turned the tide, but mainstream support coalesced behind the men.)

As Aretha Franklin sang, sisters are doin’ it for themselves. It’s up to women to support women.

That’s why today we’re debuting our new 2022 Top Races slate. Support each of these 10 women with a donation of $5 or more.

All 10 are women running in toss up races according to the Cook Political Report. They are:

❇️ Three candidates down in fundraising against opponents:

❇️ Six candidates whose races are trending Republican, according to FiveThirtyEight:

❇️ The only woman running for Senate in a toss up race, Catherine Cortez Masto (NV).

We have to support women nominees, because we can’t count on anyone else. We have to put all our efforts behind women who are still in the race, to stem our losses this year so we can make big gains (starting with recruitment) in 2024.