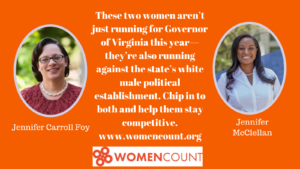 Note: BHM: 2021 Governors is the last slate in our Black History Month series, but it definitely won’t be our last new slate featuring Black women. This cycle, promoting Black women candidates for all levels of elected office will be something we’re focused on every single day.

There have only been four Black governors in the history of the United States—and there has never been a Black woman governor.

But this year, two women are running to be Governor of Virginia: Jennifer Carroll Foy and Jennifer McClellan. And the Democratic primary is coming up, on June 8.

Virginia governors have made Black history before. The first post-reconstruction Black governor, Doug Wilder, was elected in Virginia, in 1989. Now, Virginia could elect not only the first Black woman governor in the US, but the first woman ever to serve in the state’s highest office.

Help one of these Jennifers make history: Give now to both through our BHM: 2021 Governors slate.

They will have a tough road, to be sure. The primary is crowded and includes former Virginia Gov. Terry McAuliffe. McAuliffe has outraised his primary opponents, but insiders tell us his path to victory is not certain.

Which is why it is important to support Jennifer Carroll Foy and Jennifer McClellan—to keep them competitive in this race. A little more about the candidates, who are already both history-makers in their own right:

Jennifer Carroll Foy was elected to represent Virginia’s 2nd house district in the 2018 wave. She spent her first-and-only term doing more than many state legislators do in 10 terms, spearheading the passage of the Equal Rights Amendment, Medicaid expansion, and gun reforms. Before she was a legislator she was a public defender, and before that, she was one of the first women to graduate from the formerly all-male Virginia Military Institute.

Jennifer McClellan represented Virginia’s 71st house district from 2006 through 2016, when she was elected to the state senate’s 9th district. She’s spent her legislative career protecting women’s rights and reproductive rights, sponsoring landmark legislation like the Pregnant Workers Fairness Act and The Reproductive Health Protection Act. She was the first Virginia delegate to be pregnant while in office.

Of course, these two women aren’t just running for Governor of Virginia this year—they’re running against the state’s white male political establishment.

Chip in to both and help them stay competitive.