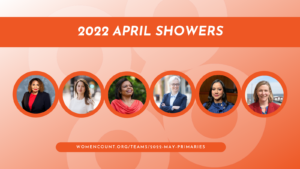 We’re back in your inbox with an update on our April Showers slate.

You’ll notice one prominent candidate missing from this slate: Stacey Abrams, who doesn’t have a primary challenger. Cheri Beasley has several nominal primary challengers, so we’ve included her even though she’s the clear frontrunner in North Carolina’s US Senate race.

The rest of the candidates are:

Let’s continue to shower these candidates with cash. Give $30 or more to our 2022 April Showers slate.