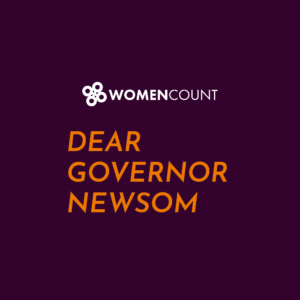 It has been less than two weeks since Kamala Harris officially became the Vice President-Elect, but there’s already an intense campaign to be her successor in the US Senate.

This campaign centers not on voters, but on California Gov. Gavin Newsom, who will pick her replacement—and we’re hearing he could make his choice soon. We’ve also heard that several men are on the short list.

Obviously, that’s not right. So today we’re rolling out a petition urging Gov. Newsom to pick a woman of color. And we have some suggestions for who she could be.

This appointment is an opportunity to maintain the gains in representation women of color overall have made in Congress—NOT send our country backward.

And not choosing a woman of color would be a BIG step backward. With Kamala out of the Senate, there won’t be a single Black woman in the chamber. And there will only be three other women of color: Sens. Tammy Duckworth, Mazie Hirono and Catherine Cortez Masto. As it is, Democratic women of color have already lost ground in Congress after this election due to a one-seat net loss in the House, and we can’t afford to lose more.

We’re combining our signatures with others from groups in California and around the country to make the biggest impact. Once we collect and deliver the signatures, we’ll let you know the final tally.

Let’s tell Gov. Newsom not to send representation backward: Sign our pledge urging him to fill Kamala’s Senate seat with a woman of color.