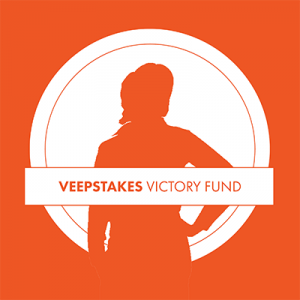 Have you heard the rumors?

According to the political chatter, Joe Biden will announce his running mate in the first few days of August—giving us less than two weeks to raise at least $10,000 into our Veepstakes Victory Fund!

In case you’ve forgotten how this works: Every dollar we raise into the Fund will be released to the presidential campaign as soon as the VP nominee is chosen. That helps ensure that the pick, no matter who she is, will have an immediate network of grassroots donor support.

Originally, we set the fund up during the heated final days of Joe Biden’s and Bernie Sanders’s race to the nomination. Women, shut out of the top job after a historic primary, were clamoring for representation, and we wanted to entice the presidential candidates to pledge to put a woman on the ticket. If they didn’t, they wouldn’t get the money from the Fund.

Well, this pressure from women activists worked: Joe Biden has pledged to put a woman on the ticket, and he clenched the nomination soon after.

Now, the Veepstakes Victory Fund stands ready to fuel Joe Biden’s run for the White House, under the banner of his historic VP nominee.

Give $5 or more to our Veepstakes Victory Fund now and we’ll roll it into the presidential campaign as soon as Biden announces his VP pick.

This nominee will quickly be under siege; let’s make sure she knows we have her back.

We’re hoping to raise the $10k by Friday, and any amount helps us get there.