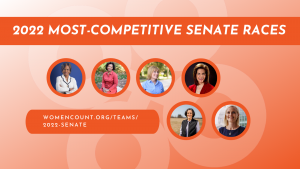 Moments ago, Senate Republicans filibustered democracy reform legislation known as the For the People Act.

Hope is NOT lost: Some senators are still searching for a legislative solution, and more than 60 percent of voters support the bill’s key components, like ending partisan gerrymandering and guaranteeing early voting.

But we all know that if we had just a few more votes in the Senate for ending the filibuster, we’d be passing the For the People Act and other bold legislation right now, instead of begging Sen. Joe Manchin to find a compromise.

The Senate map looks good for Democrats, but we need to start working now to make sure women have the financial resources they need to win key races. In case you need a reminder, the slate is:

Turn anger into action today: Give $30 or more to our 2022 Senate slate before the critical June 30 reporting deadline.