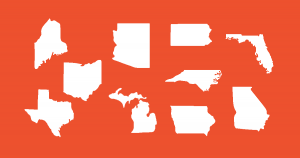 The States in Play

It’s the question everyone is asking: When will we have election results?

Like others, we can only guess, based on when the polls close in key states and how long it will take states to count all the votes. (FiveThirtyEight and several other election forecasters have already done that prognosticating for us).

But one thing we can say with certainty is that women are again poised to make historic gains.

Earlier this year, we predicted that women would win at least 106 seats in the House, and possibly net one in the Senate. That would bring the total number of women in Congress up to 133, or nearly 25 percent of seats. Currently, we’re at 24 percent.

With most of our freshman incumbents seeming increasingly safe, and an expected blue wave putting more seats in play, our gains could be even bigger. And, of course, we also hope to witness the historic election of a Black woman to the vice presidency.

Below are key races for women and when we might know results. These are some of the closest races in the country in which women could flip Republican-held seats. Most, but not all, are also man-to-woman flips. Some races (*) are already seen as likely flips.

Want to know all the results? Follow along in real time with the Center for American Women and Politics’ results tracker.

We look forward to sharing results, and news of gains for women, as soon as we know them.

Election Night or Soon After

There are actually a lot of states where we’ll have a good read by midnight Tuesday since vote-by-mail ballot counting starts before Election Day. Additionally, most of the Election Day vote is expected to be counted right after polls close.

You’ll see three big presidential battleground states on this list—Arizona, Florida and North Carolina—and seven smaller states—Arkansas, Colorado, Kentucky, Maine, Missouri, Montana and Nebraska—that have key House and Senate races. Early results in these states will be a good indicator of whether Democrats (and women) will make big gains up and down the ballot.

Among them, there are three flippable US Senate seats, four flippable US House seats, and two states that apportion electoral votes by Congressional district. All of the House races are pure tossups or leaning Republican (and most districts are largely rural), so wins could presage the beginning of a massive blue wave or dip in base turnout for Trump.

A few wrinkles though: If no Maine Senate candidate wins a majority, it could take days to tally the winner because of the state’s use of ranked choice voting. And if the race is very close in North Carolina we’ll be waiting until the mail ballot deadline on Nov. 6.

Democratic women could make big gains up and down the ticket in two states, Iowa and Texas. In Iowa, women (including two incumbents) are running in three of Iowa’s four House races, and in maybe the second-most-watched Senate contest featuring two women. Iowa could also be the tipping point state for Senate control—especially if it looks like Georgia will go into a runoff. In Texas, women can flip three House seats and a Senate seat.

All of these states start counting mail ballots on or before Election Day, so that should speed things up, even in states like Texas that have seen an early voting surge. Of course, this all depends on how close the race is. If we’re waiting on the mail receipt deadline in Ohio (Nov. 13) or Texas (Nov. 12), those states could slide into our next category. And some states that count quickly, like Wisconsin and Indiana, could have results on Wednesday.

Indiana
US House — Christina Hale, IN-5

A Week or More

Right now, it does not look like we’ll be waiting weeks to know the result of the presidential election (we did knock on wood after typing that, though). Unless Pennsylvania is the state that will determine the Electoral College winner. In some of the most populous counties, mail ballots won’t be counted until after Election Day, and Pennsylvania is accepting mailed ballots until the end of the week.

The other three large states on this list, California, New Jersey and New York, don’t matter for the presidential election but do feature competitive US House races. New York and New Jersey were infamously slow to count during the primary as they transitioned to mail ballots. California is always slow to report because of their traditionally high use of mail ballots. Alaska is a special case: They won’t even start counting mail ballots until next Tuesday.

Keep an eye on these states throughout November, even if Pennsylvania is called. Women could gain as many as six House seats.