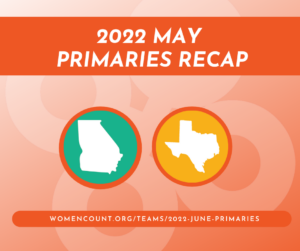 May primaries officially wrapped up last week, and we have results for most of the candidates we were watching.

It was a big night for women in Georgia, with Stacey Abrams winning the gubernatorial nomination easily. Jen Jordan also won the primary for attorney general outright, while Bee Nguyen advanced to a runoff in the secretary of state race, though she looks likely to win, having clenched 44 percent of the vote. Unfortunately, Renitta Shannon fell short in the race for lieutenant governor.

Other big wins include:

Let’s send more women to victory in June: Give $5 to each woman on our June Primaries slate.

Time is running out to support women running in primaries on June 7.

The most closely watched primary of the month, Jessica Cisneros versus incumbent Rep. Henry Cuellar in TX-28, is still too close to call. And in TX-15, Michelle Vallejo is leading her male opponent by only 30 votes for this tossup seat. Both races are still waiting on mail ballots and a likely recount.

We’ll send an ASAP update once these races are officially decided.

Stay tuned for more primary news after next Tuesday.