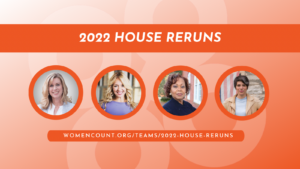 Hurry up and wait.

This week’s win for Shontel Brown in OH-11 might be the most excitement we’ll see in a Congressional race for some time, because of the delayed redistricting process, which has in turn delayed candidate announcements in districts that will be key to keeping control of the House next year.

You can support all of them right now through our 2022 House Reruns slate. Chip in $5 or more to each candidate who’s running to finish what she started last year.

A little more background on each race:

Christy Smith: CA-25 was one of only four House races last year that were decided by less than 1 percent (Republicans came out ahead in all of them). The vote margin was a measly 333 votes, out of more than 320,000 votes cast. At this point, it’s probably the district most likely to flip next year.

Brynne Kennedy: CA-4 is a sprawling central-CA district that was an R+30 stronghold, but has moved to within less than 10 points of flipping. But redistricting and trends in voter enthusiasm could put it within reach.

Liz Johnson: Winning GA-12 would be a reach—it went red by double-digits in 2020—but if it can flip, Liz can do it. She narrowed the gap last year, and this year has nearly beat her 2020 fundraising total, thanks to excitement from individual donors.

Alaina Shearer: OH-12 is also a stretch district. But the state is scheduled to lose a seat in Congress due to redistricting, and that could shake up the statewide map, putting districts like this one in play.

These four women are some of the first running in competitive 2022 races. Give $5 or more and help them post impressive early fundraising numbers.