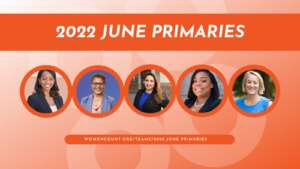 Tuesday’s primary election results are in, and it’s a mixed bag for Democrats and women.

Reminder: The next big primary date is June 28—or Super Tuesday 2022, as we’re calling it.

Today’s slate features women in California who made it into the “top two” and women running in Illinois primaries who need donations now during this final leg of the race.

The Golden State has an open primary, where the top two candidates advance to November’s general election.

There’s less than three weeks to prepare for the final round of June primaries. Give $5 now to each remaining candidate on our June primaries slate.