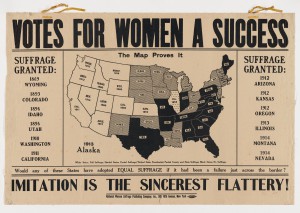 Votes for women a success! Imagine that!

Will we have a woman in the White House on the 100th anniversary of women’s suffrage?

The 19th Amendment was ratified on August 18, 1920. Nearly 100 years later, we have a record number of women running for the presidency. And on the centennial of suffrage, we’ll be less than three months away from potentially electing one of them to sit behind the Resolute Desk.

The Presidents’ Day holiday got us thinking about this. Every year it comes and goes, and women and girls across the country make the same sad observation:

Forty-five American presidents and not one woman among them.

This year, Presidents’ Day is a call-to-action for those of us committed to electing a woman president. And momentum is building for us to get it done.

Next year we have a chance once again to elect the first woman President of the United States—and unlike in 2016, the weight of this mission does not rest on one woman’s shoulders alone.

Four amazing, qualified women are running for president as top-tier candidates. Celebrate Presidents’ Day by chipping in $20 to each of their campaigns.

In February 2016, we vowed that not one more Presidents’ Day would go by without celebrating a woman in our nation’s top job. Instead, two years have passed—with two more to go before we can make good on that vow.

Little girls (and boys!) are counting on us to make 2020 the year this finally happens, to make it the last year they walk into their first elementary school class without seeing a single female face represented in timelines and textbook lessons about US Presidents.

It will be 100 years since we won the right to vote—shouldn’t it be the year we finally put a woman in our nation’s highest office?