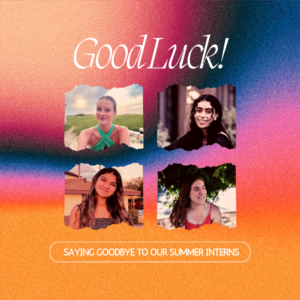 This week we’re proud to present our summer intern slates. As we do every year, we asked each of them to create a personalized WomenCount slate that reflects their values, interests, and experience this summer.

Please read all about our interns and consider supporting their slates. And a huge thank you to the interns from all of us at WomenCount. We will miss you!

The Interns & Their Slates

Julia Lang is a junior at Wake Forest University, where she studies politics and psychology. She grew up in the Boston area with her four siblings and parents. Julia has interned remotely for WomenCount this summer and also works part time for Senator Kirsten Gillibrand’s office. She joined WomenCount to learn more about political fundraising. After graduation, she hopes to attend law school.

Julia is passionate about ending sexual assault. Plus, North Carolina is a swing state where Democrats have a chance to flip state legislative seats. That’s why she chose her slate, North Carolina State Legislative Candidates Sponsoring Sexual Assault Legislation.

Check it out and chip in $5 or more to these candidates who support sexual assault survivors.

Riyana Srihari is a rising senior at the Nueva School. She’s a leader on the debate team and loves to peer tutor and volunteer for Peninsula Bridge, an organization that provides specialized education to underprivileged youth. She spends her free time singing and participating in programs at the American Conservatory of Theater.

Riyana started paying attention to national politics in 5th grade, when she did a school project on the Affordable Care Act and realized just how much of an impact government policies could have on underserved communities. That pushed her to volunteer with grassroots organizations and phone banking programs. She interned with WomenCount last year and was excited to return this summer to keep working to support women in politics.

COVID has exposed weaknesses in our child care system, as parents lost outlets like daycares and preschools. Riyana believes funding childcare and educational programs is one of the best ways to support parents and children, and break the cycle of poverty. That’s why she created her slate, We Care About Childcare.

Check out her slate and chip in $5 or more to these candidates who support affordable childcare.

Carina Totty is a sophomore at the Nueva School. She is on the student council and leads a club called Roundtable, a political discussion-based club where members interview speakers on political and economic matters. She spends her free time kickboxing and running.

She first got interested in politics after what unfolded during the 2016 election. After following Hillary Clinton’s campaign, she became more aware of the sexism that permeates our political system. She realized the need for more female representation, which motivated her to intern for WomenCount.

The Supreme Court’s recent overturning of Roe v Wade was a big step back for women’s rights in America. Sponsors of the Women’s Health Protection Act, a bill aimed at protecting the right to abortion despite SCOTUS, are up for re-election and need support to continue at the forefront of the abortion battle.

Check out her slate and chip in $5 or more to these candidates who will protect abortion rights.

Sarah Willrich just graduated from the Nueva School and is looking forward to starting college at the University of Chicago this fall. Her wake up call to the political world was the 2016 election. Since then, she has studied politics inside and outside of the classroom. Outside of her academic life, Sarah loves to beat her friends at Mario Kart and play with her beloved cats. She joined WomenCount to help get more qualified women in office.

As someone who grew up in the San Francisco Bay Area and will be living in Chicago for college, cities fascinate Sarah. Cities are hubs of innovation, culture, social movements, and amenities.

So many incredible things come out of cities, but they have plenty of problems too. It’s important to make sure we have qualified leaders who engage with their communities to lead cities into the future. That’s why Sarah created her slate, Securing the Cities.

Check it out and chip in $5 or more to these candidates who support strong cities.