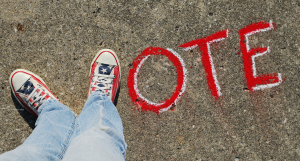 All eyes are on the presidential primaries — but there are five House and Senate seats where women are competing in tight Democratic primaries (and caucuses) this primary season.

If they win, these women become frontrunners to pick up seats in November and build on the current (pathetic) 19 percent of seats in Congress that women hold.

Morgan Carroll, an attorney known for her work representing people with disabilities, is the Minority Leader in the Colorado Senate. If she makes it through the primary, she is poised to unseat sitting Republican Rep. Mike Coffman in a state that will be a presidential battleground in November.

If Emily Cain wins her primary contest in Maine, she sets up a rematch with incumbent Rep. Bruce Poliquin that will become one of the tightest races in the country in November. Emily is a former member of the Maine House and Senate — and at 35 she is also a member of our Gen X slate.

Val Demings was the first woman to become Chief of Police in Orlando, Fla. If she wins in this three-way primary, she becomes the favorite to unseat Republican Rep. Dan Webster.

Nancy Rodkin Rotering, the first female mayor of Highland Park, is locked in a primary battle with a former Member of Congress. If she wins, she faces Republican Rep. Robert Dold in a race that’s currently a toss-up, so this is another potential pick-up for Democrats and women.

Deb Ross, an attorney, has been endorsed by the Democratic Senatorial Campaign Committee as the best chance to unseat incumbent Sen. Richard Burr in North Carolina. This seat is a top pick-up opportunity for Democrats in November in the bid to turn the Senate red to blue.