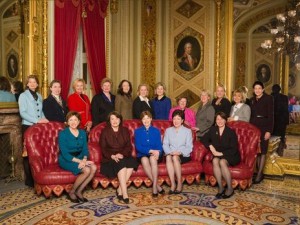 “Over the past century, women have occupied some of the highest places of power in the United States, becoming Secretaries of State, Justices of the Supreme Court and CEOs of major corporations. Yet, only 100 years ago, women in the United States did not have the basic right to vote. The progression of women’s struggle for equality is stunning, but it is certainly not over. Women represent half of the United States population, yet they only occupy 20 percent of the seats in the United States Congress. This disparity shows a need for more female leaders in the U.S.”