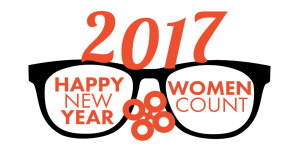 There’s no denying that 2016 has been a rough year. The toughest fact, of course, is that our country won’t see its first woman president (yet!) and instead elevated to that office the most temperamentally unfit man ever to seek it.

But we don’t have time to sit around and despair — and we shouldn’t, because at WomenCount, we have something to celebrate. Several things, actually:

We would not have accomplished so much this year without your support, and we will only make gains in the future by sticking together. So from all of us at WomenCount — thank you. Over the next two years we’ll be working hard to build on what we’ve accomplished this year to win big in 2017, 2018 and beyond.

We hope you’ll stick with us. Happy New Year!