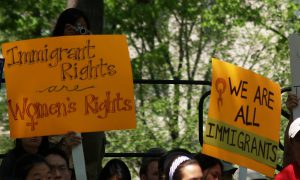 In the last six weeks, the Trump Administration has separated nearly 2,000 children from their families at the US-Mexico border.

Donald Trump is using these children as leverage, telling lawmakers that family separation will continue unless they agree to an immigration bill that implements other draconian policies, like funding the border wall and barring legal immigrants from bringing their children to the US.

Ripping children out of their parents’ arms is not an immigration policy or negotiation tactic. It’s simply immoral—and Democrats are standing up to stop it. There are three ways you can help now:

All 11 Democratic women of the Senate are signing on to the Keep Families Together Act. But Sens. Feinstein, Kamala Harris and Catherine Cortez Masto also led on immigration when they co-sponsored the bipartisan Dream Act introduced last summer. Late yesterday Harris called on the Homeland Security Secretary to resign. And Gov. Kate Brown has taken multiple executive actions—including signing legislation—to effectively make Oregon a sanctuary state.

Thank them all by supporting our Immigration Leadership slate.