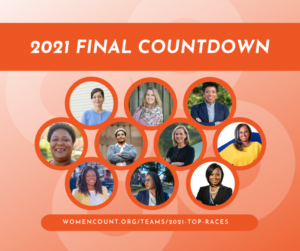 There is less than one week until Election Day 2021, so we’ve compiled the most-consequential races in the country featuring women. Chip in $5 or more ASAP and help give these Top 10 candidates a last-minute surge.

Polling for Democrats up and down the ballot is still much closer than it should be. The most recent has lieutenant governor candidate Del. Hala Ayala barely leading her Republican opponent, at 47.1 percent to 46.8.

And the generic General Assembly ballot actually has Republicans leading by 1 point. District 10 Del. Wendy Gooditis and District 51 candidate Briana Sewell are in two of the closest races. Wendy is currently being outraised by her Republican opponent, and Briana needs to keep control of Hala’s former seat.

In Atlanta, we have a two-person race between City Council President Felicia Moore and former mayor Kasim Reed. The latest poll has Felicia slightly ahead, at 23 to 20 percent. But 41 percent of voters are still undecided.

In Buffalo, a poll in September had Mayor Byron Brown leading India Walton by a 10-point margin. But she pulled out an upset in the primary and can do it again. She also just picked up endorsements from Sen. Kirsten Gillibrand and AOC.

And in Manchester, NH, Mayor Joyce Craig will be in a rematch against the same Republican she beat in 2019, but primary results indicate the race could be closer this time.

The City Council could see a similar shift. There are three prominent non-incumbent Black women running: Carla Monteiro and Ruthzee Louijeune for two open at-large seats, and Kendra Hicks for an open seat in District 6. If they win, Black women’s representation on the Council could nearly double. All have also been endorsed by Rep. Ayanna Pressley.

And in Dayton, Shenise Turner-Sloss is running in a close race. If elected, she’ll be the only woman of color serving on the City Commission there.

This is your last chance to support women running in the 10 closest races this year. Chip in $5 or more to each of them now.