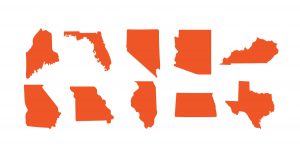 This is it: Our top 10 most competitive races—for governor, House, and Senate.

These are all toss-up contests, where the winners will determine whether Democrats can take back control of the US House and Senate and wield power in some of the biggest or most closely divided states in the country.

At the top of our ticket are gubernatorial candidates Stacey Abrams (GA) and Janet Mills (ME). We need Stacey to act as a check on bad legislation from Georgia’s GOP-controlled legislature, and Janet to show that Maine is a blue state—and federal lawmakers like Sen. Susan Collins should feel the pressure.

Right now, both are running neck-and-neck with their Republican opponents. Chip in $5 to each of them and the 8 other women on our WomenCount 2018 Top 10 slate.

The slate includes four US Senate races that will determine whether Democrats control the chamber in 2019. They are sitting Sens. Heidi Heitkamp and Claire McCaskill—from the red states of North Dakota and Missouri—and Reps. Jacky Rosen and Kyrsten Sinema, who are hoping to flip seats in Nevada and Arizona.

And then there are four US House candidates: Debbie Mucarsel-Powell (FL-26), Lauren Underwood (IL-14), Amy McGrath (KY-6) and Lizzie Fletcher (TX-7). Why these four? In Florida and Texas, we need to show the strength of our diverse Democratic coalition. And in Illinois and Kentucky, we need to show that Democrats can still compete in non-urban America.

Give these 10 candidates a grassroots fundraising push over the finish line. Chip in $5 to each of them.