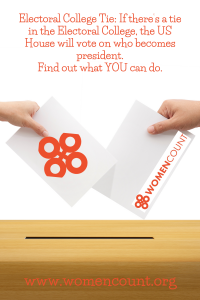 The race for the White House has been thrown into turmoil with President Trump’s illness, and yet we know we have to donate and vote as though nothing at all has changed.

So while the news cycle remains dominated by the White House COVID diagnoses, we’re down a rabbit hole thinking about what happens after Election Day.

What if Joe Biden wins, and Donald Trump refuses to leave? Or it’s close, and Trump successfully leverages the courts to suppress mail-in votes and eek out a victory? Or he lobbies state legislatures to appoint electors who subvert the popular vote?

There’s one scenario you maybe haven’t thought of yet:

What if the Electoral College is tied? Either legitimately, or because GOP-led states have refused to certify Biden’s electors? The House of Representatives would then vote on who becomes the next president—but Democrats wouldn’t win, even though we control the chamber.

That’s because it’s not each member who votes. It’s each delegation—50 votes, instead of 435—and the party that makes up the majority in each delegation will determine which candidate wins each state’s vote.

And that’s a problem for us, because even though Democrats have a strong majority in the House, we don’t control a majority of Congressional delegations. Republicans control 26 delegations, the exact number they need to elect Trump president if the Electoral College is tied.

There’s good news though: The Congress that votes will be the 117th Congress, the representatives we’re electing in just 30 days. We have the chance to flip four delegations in Alaska, Montana (both currently held by Republicans), Michigan and Pennsylvania (both currently tied). We also need to hold control of Iowa and Florida, where Democrats who flipped seats in 2018 are in razor-tight races.

Even better, we can do all of this by electing women. Chip in $5 or more now to each of the women on our Electoral College Tie slate. These women will help deliver a House delegation majority.