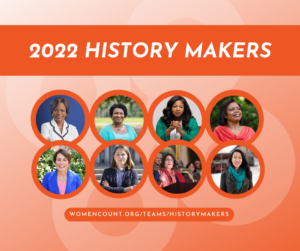 Today is International Women’s Day, when countries around the globe celebrate the achievements of women, and acknowledge the barriers that still need to be broken.

At WomenCount, we’re working to help break a barrier that keeps women from obtaining parity in politics: The persistent fundraising gap between male and female candidates.

That’s why today we’re rolling out our 2022 History Makers slate: Eight women who will break a barrier if they’re elected this year. Give $5 to each of them.

Let’s make sure these women have the funding they need to make history: Give $5 or more to all eight or customize your donation.