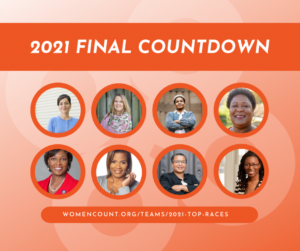 We are just under eight weeks from the “off-year” Election Day 2021, the *most important* weeks of any election year.

That’s why this week we’re debuting our 2021 Top Races slate, a collection of this year’s races where your donation can make the biggest impact.

The slate is curated from our Elect Black Women PAC partnership, our Shirley’s List slate of Black women getting their start in local politics, the most-competitive Virginia races, and the top mayoral races. We’ll feature all of these slates individually over the next eight weeks too.

Check out our 2021 Top Races and chip in now—then check back often because this slate will change as we get new intel and candidates.

Polling in the governor’s and lieutenant governor’s races has been within 5 points, and Wendy is sitting in the most vulnerable seat held by a Democratic woman.

Felicia and Sandra are in crowded top-two primaries, with Cleveland’s scheduled for Sept. 14and Atlanta’s for Election Day with a runoff after if no candidate breaks 50 percent. India won an upset against the Democratic incumbent earlier this year, but now he’s mounted a write-in challenge.

The general election in Birmingham and primary in New Orleans are coming up Oct. 9, and both LaTonya and Susan are up against incumbents. Maraleen is one of six candidates for three open seats on Lehigh County’s highest court; she would be the first Black woman to serve.

Giving to these women now will make the biggest impact during these last eight weeks. Chip in to all of them on our 2021 Top Races slate.

And keep an eye on your inbox for updates on these and other races during the critical final weeks of the 2021 election season.