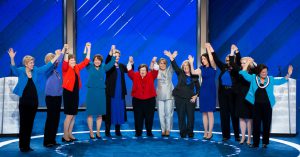 We’ve been dreading this:

Justice Anthony Kennedy just announced he’ll retire from the Supreme Court, allowing Donald Trump and the GOP-controlled Senate to elevate another right-wing extremist to the bench.

Reproductive rights, LGBT rights, healthcare access—all the decisions that have relied on a moderate 5th vote—are in jeopardy.

What’s worse? If Trump gets to replace one of four left-leaning justices. There’s literally only one thing we can do in 2018: flip the Senate.

Defend the Supreme Court: Chip in $5 to each candidate on our Take Back the Senate slate!

No day has made it clearer how much elections matter. Thankfully, we’re heading into an election where the fundamentals favor Democrats. But our path to taking back the Senate is narrow.

Ten Senate Democrats are running for re-election in states Trump won, including three women being targeted by the GOP: Sens. Tammy Baldwin (WI), Heidi Heitkamp (ND) and Claire McCaskill (MO). There are only four states where we could pick up seats, and our best chances lie with Reps. Kyrsten Sinema (AZ) and Jacky Rosen (NV).

Put your anger and sadness to work today: Chip in $5 to each of these women now!