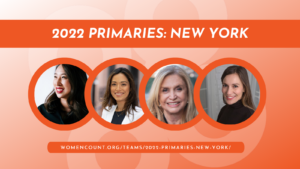 Yesterday the New York Times made its endorsements for the August 23 primaries, and it took the groundbreaking step of endorsing three white guys—Dan Goldman (NY-10), Rep. Jerry Nadler (NY-12), and Rep. Sean Patrick Maloney (NY-17)—in three races where every other serious candidate is either a woman or man of color.

In fact, there are four women running competitive campaigns in these races, and you can give to each of them by chipping in $20 or more to our New York Primaries slate. They are:

These endorsements are completely out of step with the current moment, when we’ve seen renewed activism among women in the wake of Dobbs, we see that activism boosting Democrats’ midterm chances, and we have research that shows women candidates are better messengers on abortion rights.

It’s also out-of-step with the Times’ own 2020 endorsements, when they picked two women—Sens. Elizabeth Warren and Amy Klobuchar—for the presidential nomination in the name of progress.

Now, we have four female candidates who are struggling to fundraise against male opponents, and the Times has ditched progress when their endorsement could be a make-it-or-break-it moment.

If you’re mad like we are , help these women overcome this slight: Chip in $20 or more to our New York Primaries slate.